Nicolas REBUS His previous life, he says no regrets. “I arrived at the top, that I could not back down.” Head sommelier at the gourmet restaurant Le Meurice, the Parisian luxury hotel on the Rue de Rivoli, where officiates the chef 3 macarons Michelin Scrap Nicolas had become a star of the profession. “A magical time, I doubled the size of the cellar, the restaurant’s mounted brigade handed sommeliers indoors …” Of course, he was starting his day at 8 am 30 to finish at 2 am, “but it was worth it,” he says.

Yet in 2010, only 33 years, grand-son of a Savoyard wine which was destined more to the kitchen as the sommelier, decided to chuck everything, the gold of the room decorated by Philippe Starck, the cozy wages, enviable position … “I heard it all:” You’re crazy, “” You’re going to lose everything, “” You’ve thought of your children “… But not about to change his mind,? I was sure of myself. ”

in which he knocked over a decade, in particular side of Bernard Loiseau and Alain Ducasse (“cellar 500 000 bottles at Louis XV in Monaco, a Dream”), the graduate from high school hotel Tain-Hermitage (Drôme) decides to start his own business and started his own company, Lac’Wine Consulting. Objective: to help restaurants improve their wine list.

“Often, restaurateurs do not have the time or opportunity to create an original wine list and simply stack known labels, he says But it is not enough. Customers today are looking for new or good business. ”

Nicolas Scrap does it all: finding new wines, develop the map, discuss the conditions of purchase … Personally, he runs a dozen French winemakers he selected and he is trying to raise awareness, particularly among great restaurants. “I, for example, managed to enter the field Ardoisières in Savoy at Robuchon, Gagnaire, Ducasse … It’s a real pride!”
source http://www.bestofsingapore.sg/restaurants-2/interview-nicolas-rebut-sommelier/

Of course, such a conversion is not a path strewn with roses. Financially, this father of two young girls said they had found a decent income that after a year, “and again I have been fortunate to work very quickly to the house Richard a major wholesalers drinks in the restaurant business, for which make winemakers wine lists. ”

Similarly, if he discovered the pleasure of organizing his own day, he acknowledges sometimes have trouble distinguishing his personal life from his professional life. “My living room has become my office, with around cases of wine, my wife appreciates moderately says he with a smile I only now understand that it is sometimes necessary to put the brakes, learn to see. after what is not urgent, not to consider the Saturday and Sunday as days of the week, otherwise it is devouring. ”

In April, it is nevertheless associated with a friend, a business angel encountered in wine courses given to individuals, another of its activities, and created a company designed to promote “his” small winemakers to abroad. “We will establish a sales office in Hong Kong, Shanghai, can be in Brazil and India, there is a real international demand for authentic wines, different.” Not sure eventually that Nicolas Scrap know what the phrase “drink responsibly” wants to say.

The number of tourist visits increased by more than 120 million over 10 years, according to a new projection.
Golden Week in China and Japan tourism statistics

Golden Week in China begins tomorrow to celebrate the National Day, the day when the Communists took power officially, which means at least two things: the disappointing economic news will stop for a week as the country stops for the holidays and Chinese tourists will flood the international airports in the biggest week for travel abroad.

+11%
Four million Chinese are planning to travel abroad, an increase of 11% percent from last year, according to “The Book”, a news site run by the state. Despite China’s stock market bubble bursting and an industry in recession, travel figures are the latest evidence that Chinese consumers are not influenced by large sometimes disastrous titles on China’s economy.
A larger number of Chinese traveling abroad is one of the unassailable world trends. Before, Chinese were either too poor to travel abroad or prohibited by a paranoid government to go abroad. Now they head abroad in droves. Fortune focused on the Chinese wave come to the United States two years ago. Chinese tourists spend about $ 6,000 in America, most of all visitors were expected, and trips to increase by 259% between 2011 and 2017; in the first quarter of this year visitors increased 19% to 560,000.
The number of Chinese tourists traveling abroad should increase by 116 million last year to about 242 million in 2024, said CEIC. “That’s almost all of Indonesia hit the beach in a single year, or Germany, Iran and Egypt combined,” Japan Official Tourism bureau 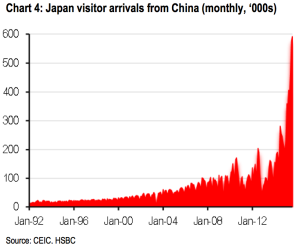 This year, China will increasingly go to Japan, taking advantage of the weakness of the yen, as they cut their trips that used to be the Hong Kong rigor destination.
The number of Chinese visitors to Hong Kong is indeed in decline since the demonstrations there last fall. Overnight visitors fell by almost 10% earlier this year. source
The press controlled by the state of China accuses the anti-mainland sentiment in Hong Kong for the Chinese to go elsewhere. Xinhua quoted a professor from Shanghai in a recent story using “persistent anti-mainland sentiment” as his excuse for not going
But the explanation is more propaganda than truth. Chinese Internet companies and government regulators censored much of Hong Kong protest coverage as happened last fall. Photos disappeared, cats were blocked and videos banned in mainland China. In addition, Hong Kong shopping areas returned to normal shortly after the protesters left.
Instead, the HBSC survey said the sharp drop in the number of Chinese travelers to Hong Kong is caused by three other reasons, including new restrictions on cross-border travel for day visitors on shopping excursions, a strengthening the Hong Kong dollar and Chinese travelers begin to be more adventurous in their choice of destination.
This includes Japan, which can accommodate the most anti-mainland sentiment of all countries, but politely greets Chinese travelers. Recent trip to China, he climbed